skip to main | skip to sidebar

Origins of an Icon

I've been trying to do this post since I started this blog but there is a problem with an iconic image and the internet: There are thousands of versions of it and it's bloody challenging to find the original. I'm finally reasonably confident that I have found it, though.
The image is of course the March of Progress. It's that ubiquitous parade of apes from a chimp like creature up to modern man. So pervasive is this image that I found a half dozen purported to be the original under the names Ascent of Man, Descent of Man, and Evolution of Man. It was most commonly credited to Charles Darwin himself.
After much searching I have come to believe the the original was titled March of Progress and was a fold out created by Rudolph Zallinger in 1965 for a Time-Life book called Early Man. It is shown in full below.

Does that look a little odd? Well I said it was a fold out. This is what it looks like folded in. Is that more familiar now? How about a more carefully selected verion? 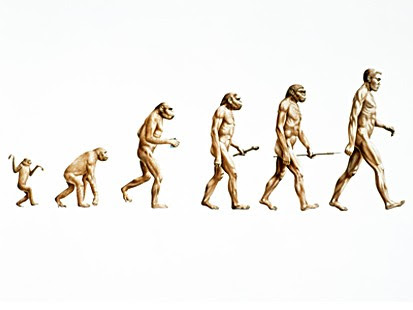 Hey that looks familiar... what if we got rid of that detail and made it a two tone graphic?

Almost there. Now all we need is a short witticism and we have one of a hundred T-shirts or a thousand comics. So stunningly effective was this image in describing the ancestry of the human species that despite its inaccuracies*, it has become synonymous with evolution. Visually, it quite literally means evolution and anyone can use it to jump past any written discourse on the concept of heredity or speciation and jump straight to their message or, more often, their punch line.

*I'm wallowing in my own personal little hell for citing Wikipedia as an authority on something.
Posted by Ryan Consell at 6:14 PM